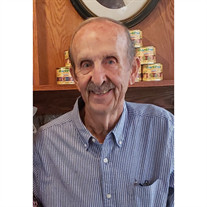 Verlin Noble Ellard, age 83, passed away on November 29, 2020. He was born June 29, 1937 in Texahoma, Oklahoma, the second son of three children of Ralph and Ver Ellard. He married his high school sweetheart, Loretta, on July 27, 1958 at First Baptist Church in Clayton, New Mexico. Verlin served in the Army from 1958 to 1960 in Germany and afterwards he was happy to join his wife in Salt Lake City, Utah. They settled here in Salt Lake City, raised 3 children, Jeffrey, Rodney, and Stephanie. Verlin served as a deacon at several Southern Baptist Churches through the years. He has been a member of Canyons Church in Salt Lake City since the early 1980s. Verlin was a machinist in the automotive industry. Verlin owned and operated Wolverine machine for 40 years. Going to work was never a chore for Verlin, it was his 'go to' place. He worked hard and played hard. Verlin loved to take road trips and motorcycle in the desert area south of the Salt Lake City area in his "younger decades". He also enjoyed boating, waterskiing at nearby lakes, and sailing in a Styrofoam sailboat which is still in his collection. As a young teenager, Verlin obtained his private pilot license by "borrowing" his brother's "borrowed" airplane to practice take off and landings. He shared the love of flying with his brother Denton. His best friend in childhood was his sister Lois and while through most of their adult life they weren't able to spend much time together, they have made up for it in recent years with many visits and nearly daily calls. Verlin enjoyed puttering in his yard - growing okra and tomatoes. Whenever his tomatoes failed to produce - Marti Crow would share her cherry tomatoes with him. Verlin is very well known for being a Ford guy. When he got his current car, a Dodge, friends asked why he did not get a Ford, his response was, "Loretta wanted a blue car." One of Verlin's passions was firearms, but more importantly he was fascinated with the history of them. He spent nearly two days in the Cody museum looking at each and everyone of them on a trip in 1991. He enjoyed going to local gun shows to talk to people about them also. Verlin is remembered by friends and family as a kind, gentle and generous soul. He always asked how you were doing and was always encouraging. Even the littlest of great nieces remembers his kindness during a short visit. He is survived by his wife, Loretta, children Jeffrey Ellard, Rodney Ellard, and Stephanie (Preston) Lockwood, sister Lois Ellard, sister in law Ora Marie Hanes, and Nieces, Nephews, and their families. Verlin is proceeded in death by his parents and his brother Denton Ellard. Interment will take place in the Utah Veterans Memorial Park Cemetery, Bluffdale, Utah.

Verlin Noble Ellard, age 83, passed away on November 29, 2020. He was born June 29, 1937 in Texahoma, Oklahoma, the second son of three children of Ralph and Ver Ellard. He married his high school sweetheart, Loretta, on July 27, 1958 at First... View Obituary & Service Information

The family of Verlin Noble Ellard created this Life Tributes page to make it easy to share your memories.

Send flowers to the Ellard family.