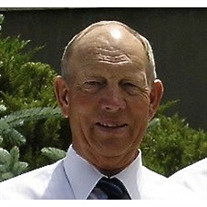 Please click the following link to view the funeral service live stream that will begin Friday, February 12, 2021 at 12:00 pm: https://my.gather.app/remember/samuel-rowley Samuel Ross Rowley March 7, 1941 - February 7, 2021 Samuel Ross Rowley passed away Sunday morning, February 7, 2021. Sam was born in Grand Junction, Colorado to Samuel M. and Guyla Burdick Rowley. Sam was the oldest of four boys which includes Frank, John, and Kent. He grew up in Monticello, Utah and graduated from Monticello High School in 1959. Sam went on to graduate from Utah State University with a degree in Range Management, then spent his career with the Bureau of Land Management (BLM) working in Utah and Nevada. Sam met his future wife Carol Lou Palmer in Dillon, Montana while working for the BLM in the Missouri River Basin and they were married in 1968. Sam and Carol had three children, Justin, Von, and Daren. Sam was a devoted husband and father who enjoyed supporting his children in their sporting and other activities. He was also a devoted fan of all sports who watched the Utah Jazz faithfully, and for nearly 20 years, enjoyed trips to the National Finals Rodeo with Carol. He was enthusiastic about any activity involving horses and loved team roping in his arena in Central Valley. In his earlier years, he went hunting with his dad and his brothers, then continued the tradition with sons Justin, Von, and friends. Following his retirement in 1996, he and Carol traveled from their home in Richfield, Utah to spend several winters in Beaver Dam, Arizona, or Hurricane, Utah. His favorite summer place was the property he and Carol bought on Monroe Mountain, spending two or three days a week there during the summer months. His favorite time on the mountain was when his children and grandchildren could join them. Sam and Carol recently moved to Herriman, Utah to be nearer to Justin in Lehi, Von in Herriman, and enjoyed summer visits from their daughter, Daren who lives in Arkansas. Sam was an active member of the Church of Jesus Christ of Latter-day Saints. He was an easy going, kind man who dearly loved his wife Carol; sons, Justin (Jewel), Von (Maren), daughter, Daren (Wayne); grandchildren, Jordan (Leela), Madison, Morgan, Logan, Gabriella, Zachary, Anna, Abigail, Hayden, Dylann, and Bodee who survive him. He is also survived by his brothers, Frank (Arizona), John (Texas) and Kent (Utah). He is preceded in death by his parents, Samuel and Guyla Rowley. Since moving to Herriman, Sam was a member of the Miller Crossing Second Ward. Interment will take place in the Herriman City Cemetery. Funeral Directors: Salt Lake Valley Mortuary.

The family of Samuel Ross Rowley created this Life Tributes page to make it easy to share your memories.

Send flowers to the Rowley family.