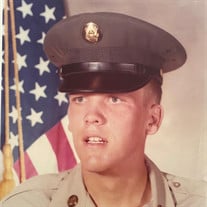 Robert Bernard Rudd, unexpectedly left this life the evening of September 1, 2021, as those he loved surrounded him with love and support. Heaven welcomed him with a warm embrace from those who passed before him, who he loved with all of his heart. Robert was born September 18, 1953 in Lehi, Utah, to Elva Delena Thomas Rudd and Bernard Eugene Rudd. He was the second of six children. He was energetic, active, and independent from the start. He was known to ruffle a few feathers but also do anything for those he loved. In his youth he loved sports, especially playing basketball. He loved to fish, and if you couldn’t find him, he most likely would be at a local fishing hole. Robert joined the Army National Guard in 1972, after high school. He loved America and always stood with her. While in the Army, he got to travel and live in many places such as Texas, Wisconsin, Germany and Korea. During his time in the Army, he married his first wife, Rita Martha Cunningham, and had three amazing children, Robert Rudd II, Jason Rudd, and Delena Rudd. He loved them and would do anything for them. He later divorced and married Ronda Ann Dillon, where he had his sweet boy, Christopher Rudd, who he was always grateful for. In time, Rhonda and he parted ways, and was brought back to Utah. Soon he met Jeanine Ruth Pearson and had his last two beautiful children, Amber Rudd and April Rudd. Robert loved all of his children! He may have shown it differently and uniquely to each but his heart was always with them. For many years after his service in the Army, Robert was a truck driver and drove all across America. Often the road was hard for him, but would make sure to brighten it up by finding treasures across the states to bring back home to share with those he loved. He found joy and purpose in providing for his family. Robert loved to make people laugh, whether it was from a silly dad joke, or tickling your ear. He was witty and often charming, and could usually lighten the mood. If you ever needed fishing advice, he was your man! If you ever needed to have a chat with him, by a lake, is where it was best. He loved to fish, but even more so, he loved to take others fishing. It was always relaxing, even if it was at 4 in the morning. He also loved to swim, and swimming with him was always a blast. He taught many how to float, backstroke, and most importantly, to BE BRAVE. He was brave and always wanted us to be brave. Being a Grandpa is where he shined! Need a Tickle Me Elmo, or a stuffed animal from a claw machine, he would make sure it was yours. Often his love was shown in coins and $2 bills. So if you have one from him, know you were loved. No one will ever replace our Dad, Grandpa, brother, or friend. He will always be with us without end. His laugh was contagious and will certainly be missed. The smell of his jacket will never be forgotten. The crinkle of his Werther’s Originals from his pockets will be etched in our hearts. He may not be able to jump in a lake with all of his clothes on to save us, but he will be there from the other side, always there to hold us up and praise us. See you soon our dear loving Dad! Robert is survived by his children, Robert Rudd II, Jason Rudd, Delena Rudd, Christopher Rudd, Amber (Rudd) Horrocks, April Rudd, his dog Winnie, 18 grandchildren, 6 great grandchildren, siblings: Thomas (Jan) Rudd, Paul (Diane) Rudd, Sheila Rudd, Sherrie (Matt) Kriek, Michael (Jessica) Rudd. He was preceded in death by father, Bernard, mother, Elva, his second wife, Ronda, and third wife, Jeanine, and niece, Allison. A Viewing will be held on Wednesday, September 8th from 6:00-8:00pm at The Church of Jesus Christ of Latter-day Saints chapel located at 601 East Mansfield Avenue, Salt Lake City, UT. A Graveside Service will be held on September 9th at 10:00 am at the Utah Veterans Memorial Park Cemetery in Bluffdale, Utah. To view the graveside service via live stream please click on the following link: https://my.gather.app/remember/robert-rudd In Lieu of flowers, the family will be accepting donations for the funeral on Venmo - @April-Rudd or @Amber-Horrocks. Funeral Directors: Salt Lake Valley Mortuary.

Robert Bernard Rudd, unexpectedly left this life the evening of September 1, 2021, as those he loved surrounded him with love and support. Heaven welcomed him with a warm embrace from those who passed before him, who he loved with all of his... View Obituary & Service Information

The family of Robert Bernard Rudd created this Life Tributes page to make it easy to share your memories.

Send flowers to the Rudd family.