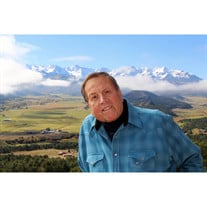 Richard Herrmann Weber, age 72, was born on October 7, 1947 to Heinrich and Sofie Weber in Chicago, Illinois. He passed away peacefully at home in Millcreek, Utah on August 6, 2020. Rich grew up with hard working German immigrant parents and his older brother Hank in the Oriole Park neighborhood of Chicago. When he wasn't busy working as an apprentice electrician with his father, Richard enjoyed playing baseball (Go Cubs!), playing with his elaborate model trains, operating his HAM radio, and going on longed for fishing trips with his father in Wisconsin and the Boundary Waters Canoe Area in Minnesota. Rich attended Lane Tech College Prep High School across town, graduating in 1965. He joined the US Air Force ROTC program which he continued through college. He had to convince his parents that attending Utah State University, so far from home, was an economical decision. He graduated with his Bachelor's degree in Social Work in 1969 and was commissioned in the USAF as a Second Lieutenant. The majority of his active duty was served at the air base in Duluth, MN in security and later as the base race relations officer. While serving in the USAF, he continued his education at the University of Wisconsin - Superior, earning his Master's degree in Education Counseling. After his honorable discharge from the USAF, Rich returned to Utah - a state with four seasons he had come to love -- and pursued a PhD in counseling psychology at the University of Utah. After working as a clinical therapist at Project Reality (a methadone program for heroin addicts), Rich began his career with the Utah State Department of Corrections - Adult Probation and Parole, where he retired as a supervisor after 25 years. He was well respected by his peers and judges for being an efficient and compassionate employee. Richard discharged from the Utah Air National Guard with the rank of Major in 1985. Rich loved and was so proud of his family. He was always the first to jump in supporting their school and church activities, coach sports teams, and take an interest in their hobbies. His next closest love was the outdoors and fishing. Most weekends he could be found taking friends and family to his favorite fishing holes, canoeing, camping or getting prepared for the next big trip. Other interests included books, movies, and TV. Rich actively participated in serving others, most recently in and through Our Saviour's Evangelical Lutheran Church. He taught Sunday School, served on congregational councils and many committees. Through the years he also worked on several synodical committees. Richard is survived by his wife Marti Clark Weber, daughter Ashley (Ryan) Judd, son Justin Weber, and grandsons Bradley Judd and Maxwell Judd. He also has daughters, Theresa Noble and Andrea Moroge, from a previous marriage. Richard is preceded in death by his mother, father, brother Henry "Hank" Weber and daughter-in-law Tennille Weber. A memorial slideshow can be viewed at: https://youtu.be/sPAvHr-1M5M . To view the funeral service, go to: https://youtu.be/jDzmjCvtjXI. The funeral service bulletin can be viewed at: https://drive.google.com/file/d/17nduS6ZqJc29sJpUWNPd8VkR2a6GfPTt/view." "In lieu of flowers, please contribute in the name of Richard H. Weber to a favored charity to support the environment or Native American Indians. Two of Rich's favorites are The Nature Conservancy, www.support.nature.org and Southwest Indian Foundation, www.southwestindian.com/foundation/donations.

Richard Herrmann Weber, age 72, was born on October 7, 1947 to Heinrich and Sofie Weber in Chicago, Illinois. He passed away peacefully at home in Millcreek, Utah on August 6, 2020. Rich grew up with hard working German immigrant parents... View Obituary & Service Information

The family of Richard Hermann Weber created this Life Tributes page to make it easy to share your memories.

Send flowers to the Weber family.