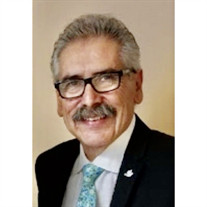 PLEASE CLICK HERE TO VIEW THE RECORDED FUNERAL SERVICES FROM MONDAY, JANUARY 4, 2021: https://my.gather.app/remember/roy-cazares Reverend Roy R. Cazares, at the age of 70, transitioned from our midst into the presence of our Lord, Jesus Christ peacefully on the morning of December 21, 2020. He was in his home in Salt Lake City. Pastor Roy was born to Alberto and Teresa Cazares on March 24, 1950 in San Antonio, Texas. He met and married the love of his life Rebecca Vigil while attending Latin American Bible College where they both graduated in 1970. They began their life of ministry together and started their first pastorate in Colorado. The two served in several congregations in both Colorado and Idaho. In 1985, they moved to Salt Lake City where he began his ministry with Centro de Vida Cristiana. For 35 years, Pastor Roy poured out love and compassion to everyone around him. Being part of so many lives meant he was part of many major events in the lives of congregants and their families. Pastor Roy also led prison and homeless ministries, and served as a Salt Lake police chaplain. He mentored countless ministers and eventually sent them out to pastor their own congregations. Pastor loved to study the word of God and considered it an honor to preach every Sunday. One of his many gifts included playing the guitar, so if he wasn't preaching he was worshiping through his gift of music. Pastor Roy's primary commitment was to his family. Making the most of every opportunity, he and Sister Becky (Papo and Nana) enjoyed having their house filled with their children, grandchildren and great-grandchildren. Whether it was eating a meal, playing games or playing the guitar, his humor would shine through the countless number of dad jokes. Pastor Roy is survived by his beautiful wife Rebecca (Sister Becky); his two daughters, Regina Cazares and Reba Archibeque (husband Pat), his grandchildren, Adrian Archibeque (wife Dineca), Cassidy Archibeque (boyfriend Austin), Sonny Archibeque (wife Gabby), Roman Cazares, Roy Cruz Cazares, and three great-granddaughters, Ava, Kaliyah, and Aleia. He is also survived by his sister Rosemary Cazares-Woolenwebber (husband Wes). He was preceded in death by his parents, Alberto and Teresa Cazares and his brother Alberto Cazares Jr. The Viewing of Reverend Roy R. Cazares is scheduled for Sunday, January 3, 2021 at Centro de Vida Cristiana from 1pm to 6pm. Masks and physical distancing rules will be upheld. Services, to be viewed via live-streaming, will be held on Monday, January 4, 2021 at 11:00 AM at the following link: https://my.gather.app/remember/roy-cazares

PLEASE CLICK HERE TO VIEW THE RECORDED FUNERAL SERVICES FROM MONDAY, JANUARY 4, 2021: https://my.gather.app/remember/roy-cazares Reverend Roy R. Cazares, at the age of 70, transitioned from our midst into the presence of our Lord, Jesus Christ... View Obituary & Service Information

The family of Reverend Roy Rojilio Cazares created this Life Tributes page to make it easy to share your memories.

PLEASE CLICK HERE TO VIEW THE RECORDED FUNERAL SERVICES FROM...

Send flowers to the Cazares family.