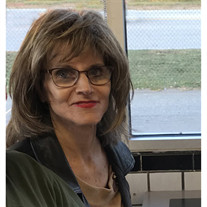 Pegi Anne Weber-Magid, born Peggy Anne Harding, passed away peacefully on September 16, 2020. For two and a half years, she strived to live boldly in her confrontation with cancer. From her initial diagnosis, she lived each day with exceptional grace, love, and tenderness towards herself and others in her situation. Peggy was born August 23, 1950, in Salt Lake City, Utah to parents Max E. Harding and Bernice (Gardener) Harding. Peggy was a kind, loving, quick-witted, intelligent, and hard-working individual who was an absolute original in everything she did. She loved expressing herself boldly with beautiful styles of hair and clothing, diversifying with the occasion, season, or the fashion of the times. She grew up in Millcreek with her parents and three siblings, Ronn, Phil, and Vicki. When Peggy was 10, her family was returning by car from camping in Southern Utah when she spotted a deer in the landscape. Peggy asked her dad to stop the car and pull over. Peggy leaped out of the car and chased the deer as fast as she could command her legs to run so that she might run alongside a deer. And that she did, for a few yards, until the deer finally outran her. She was elated to have come so near to a deer. This event inspired Peggy to try to catch an abandoned baby bunny in the wilderness on another trip to southern Utah. Peggy successfully caught the wild, long-eared rabbit separated from its mother, whom she named Thumper and raised as a pet. Thumper lived with the family for six years, and because of his playful personality and friendly manner, became something of a neighborhood sensation. Thumper and Peggy were featured in many local newspaper articles over the years, from 1960 to 1966. Peggy married her high school sweetheart, Robert A. Durrant in 1967, and had one daughter, Jennifer in 1968. The couple moved to the East Coast two years later where Rob worked for European Health Spas in New York, New Jersey, and Pennsylvania. While Jennifer attended preschool, Peggy worked part-time at the spa with Rob, serving as a fitness consultant and filling in at the Juice Bar. They lived in the area for over five years. Rob and Peggy separated, and she returned to Salt Lake City in 1976 to pursue a career in cosmetology. She studied at Salt Lake Beauty College and got her degree in 1977. For many years, Peggy worked as a hairdresser in a salon cutting and coloring hair. Peggy was always curious and never idle and enjoyed exploring many interests. In 1979, she became one of the first aerobics instructors, with her own start-up company, Energize, where she taught classes at local recreation centers. In 1987, she moved to Park City and had a keen interest in photography. She loved photographing landscapes and animals. She loved hiking in nature to capture mountainous landscapes on film and became an expert photographic printer during this time. In 1990, Peggy moved to San Francisco to follow a dream of living in California. She put down roots in Berkeley where she worked as a photographic printer and eventually met her next husband, with whom she was married for 10 years. They resided in Berkeley and later moved to Forestville, and had a second home in Hawaii, where they visited several times a year. During this time, Peggy owned and operated a vintage clothing and costume shop, Backstage Costumes, on Solano Avenue for 8 years. She shuttered the shop when they moved north to rural Forestville, where they bred and raised dogs, mostly pure-bred Pomeranians. She became a well-known breeder and found homes for many litters. After divorcing, in 2005 Peggy returned to Utah and settled in the Taylorsville area. In 2006, she became a grandmother to a grandson, Daniel who was born in San Francisco. In 2010 she began working as an insurance broker for the Affordable Care Act. Peggy was extremely proud to work for the Obama Administration and was very passionate about enrolling people in the insurance plan, where she worked for many years. In 2015, Peggy met Roberto Lopez, the love of her life, in Salt Lake City. The couple decided to commit to one another and move together to Park City in 2016. Peggy semi-retired then but continued to work part-time in retail. Peggy and Roberto made dozens of road trips together across the United States from Utah to Washington D.C. and as far south as New Mexico. She loved traveling and seeing America by car. Peggy dearly loved her neighbors and the natural vicinity around where she lived. She had a life-long passion for nutrition and exercise. She worked out several times a week at the gym until her illness required her to stop. However, nothing ever truly stopped Peggy from excelling in strength. In her final days, she could maneuver a walker with speed and hand-power a wheelchair. In everything in life, Peggy exhibited humor, tenacity, and grace. She is survived by her life partner, Roberto Lopez, her daughter Jennifer, and Piers, her son-in-law, and grandson, Daniel; as well as her siblings, Ronn Harding (Jan), Phil Harding (Thana), and Vicki Harding (Bill). In lieu of flowers, please send donations to Susan G. Komen Breast Cancer Education Fund here: https://bit.ly/33XTgdc

Pegi Anne Weber-Magid, born Peggy Anne Harding, passed away peacefully on September 16, 2020. For two and a half years, she strived to live boldly in her confrontation with cancer. From her initial diagnosis, she lived each day with exceptional... View Obituary & Service Information

The family of Pegi Anne Weber-Magid created this Life Tributes page to make it easy to share your memories.

Send flowers to the Weber-Magid family.