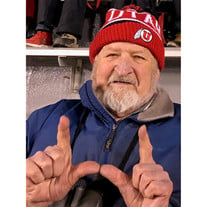 Michael Joseph Flynn 1931 - 2020 Michael Joseph Flynn passed away at home on February 26, 2020. Mike was born in Philadelphia, PA, the first of 3 children born to Joseph Flynn and Anne Theresa Hume. His father, Joseph, passed away when Mike was young. His mother worked hard to provide for her children, and they lived with relatives to help make ends meet. As a child Mike worked after school and on weekends donating his earnings to the family. Mike never outgrew the need to stretch a dollar, reuse and save. It also imprinted on him the need to give to others. As a young man, he was drafted and served in the army at the end of the Korean War. He attended Temple University in Philadelphia before finding employment with IBM. He married Leora Burke and started a family. On trips to visit his in laws in Idaho, he fell in love with the West. He jumped at the chance to move to Salt Lake City when a transfer became available with IBM. In Salt Lake City, he joined the Newcomers Club and the Wasatch Mountain Club. He learned to ski, took up hiking, fly fishing, canoeing, camping and backpacking. He enjoyed card nights with friends. He had a life-long love of sports that began when his grandfather took him to watch football and baseball games as a young boy. He was a proud member of the University of Utah's Crimson Club and a season ticket holder for the U's football and basketball games. In his 50's he took an early retirement from IBM that included retraining. He took advantage of the opportunity to go back to school, earning a bachelor's degree in accounting from Westminster College. While in school, he also began cooking. His determination to perfect the apple pie was particularly enjoyed by his family. Upon graduation, he launched a second career as an auditor with the IRS. After retiring from the IRS, he worked a season at the North rim of the Grand Canyon to more fully enjoy the park and subsequently began volunteering at the Guadalupe School and Red Butte Gardens. He also traveled, visiting destinations in China, Kenya, Italy, Peru, Turkey and the United States. He was always learning. He read frequently on a variety of subjects, but favorites were politics, history, science, and nature. He took classes at the University of Utah for many years in retirement. More recently, he was slowing down and didn't get out to enjoy nature or volunteering like he once did. However, he still enjoyed getting together with good friends to share a laugh and a drink. He is survived by his daughter, Deirdre Flynn, and son in law Mohamed Abdallah. He is preceded in death by his daughter Colleen Flynn, parents, brother Charles Flynn and sister Mary Long. In lieu of flowers, please consider making a donation to Wasatch Community Gardens at https://wasatchgardens.org/. Newspaper: Michael Joseph Flynn

The family of Michael Joseph Flynn created this Life Tributes page to make it easy to share your memories.

Send flowers to the Flynn family.