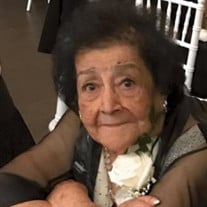 Lupe Garcia Siqueiros (Mama and Gram) peacefully snuck away to be with the Lord on September 27, 2021. Born to Petronilo Garcia and Refugio Castanon in Los Angeles, California on November 28, 1923. Her childhood home was filled with the love of a hard-working father. The early loss of her mother put her into the position of helping to raise her siblings whom she always referred to lovingly as “the kids”, and the youngest was “Babe”. She attended Los Angeles County Schools and excelled in her studies, her love for numbers grew as she mastered her talent as a seamstress making most of her families clothing. As she grew her family, she then made her children’s clothing. She was awarded prize ribbons recognized for her beautifully sewn costumes during the Riverside County Date Festival. Her children were often stopped by other visitors at the festival to take photographs of her creations. Cousins who eventually inherited the wonderfully fashioned garments were beyond thrilled to be seen in her creations. The beauty of her niece Helen’s wedding gown was one of her crowning glories. She also mastered the art of floral design and gardening. Her love for flowers and plants is one shared by all her sisters. They could spend hours in discussions over the numerous varieties. Numbers were ever present, teaching her grandchildren through a deck of cards how to count, add and subtract. In her later years she was passionate about dominoes. She was a fierce competitor and loved to win. She married Gregorio (Ray) Siqueiros and relocated to the Coachella Valley, and it became her forever home. She busied herself with her extended family furthering her culinary skills. She stood side by side in the kitchen with her mother-in law learning and taking to memory all the Siqueiros family recipes. Mom’s kitchen was the best place for everyone to come and rest, to take refuge and enjoy her Iced Sweet Tea, Fried Chicken, Chili Verde, Chicken Mole’, Potato Salad and of course her Menudo! During World War II she was an original “Rosie the Riveter”. She worked for North American Aviation in Los Angeles California as a Quality Control Inspector. She took pride in the planes that were built on her watch and was proud to serve her country. She worked as a school bus driver for Desert Sands Unified School District and always wanted to drive a semi cross country. She loved driving and prided herself in never getting a citation and being accident free. Her love for her family came second to none. Her home was forever filled with her grandchildren and great-grandchildren. She loved baseball and rooting for the Atlanta Braves. She was “that mom” that coached from behind home plate to her son, helping to develop his catching skills. She knew the game, the players, and could talk ball without hesitation. Her faith and prayer life carried her through the valleys that life can bring. She was the one that family and friends would call on to pray in times of need, her response was always “Yes, I’ll get on my knees”. She was adopted as Mom and Gram to many. She was practical, humble, and quick whited. She loved deep and was fierce when it came to protecting her cubs. And her nails were always spot on! She was preceded in death by her husband Gregorio R. Siqueiros, her infant children Mary, Kathy, Raymond and Steve Siqueiros. And her adult children Barbara Teran and Harold Siqueiros; sisters, Juanita Martinez, Tillie Lopez, and Annie Mayo. She is survived by her youngest sister Nellie Magana; daughters, Lori Acosta-Grubb (son-in-law Mike Grubb) and Loraine Siqueiros-Franco; 11 grandchildren, 32 great grandchildren and 11 great-great grandchildren. Funeral Mass will be held Wednesday, October 6th, at 10:00 am, at St. Francis of Assisi Catholic Church, 47225 Washington Street, La Quinta, California. A Celebration of Life will be held Wednesday after the service, at the JPL Church, 39001 Monterey Avenue, Rancho Mirage, California from 11:30 am to 1:30 pm. Interment to take place Thursday, October 7th, at 9:00 am, at the Coachella Valley Cemetery, 82925 Avenue 52, Coachella, California. Funeral Directors: Salt Lake Valley Mortuary assisted by FitzHenry-Wiefels Indio Mortuary.

Lupe Garcia Siqueiros (Mama and Gram) peacefully snuck away to be with the Lord on September 27, 2021. Born to Petronilo Garcia and Refugio Castanon in Los Angeles, California on November 28, 1923. Her childhood home was filled with the love... View Obituary & Service Information

The family of Lupe Garcia Siqueiros created this Life Tributes page to make it easy to share your memories.

Lupe Garcia Siqueiros (Mama and Gram) peacefully snuck away to...

Send flowers to the Siqueiros family.