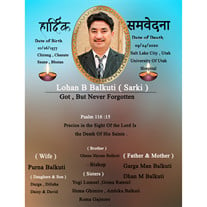 Lohan B. Sarki, 43 years, died on September 24th 2020 with his family by his side at the University of Utah Hospital. He was born on January 26, 1977 to Garja Man and Dhan Maya Balkuti in Chirang, Bhutan. He later moved to Nepal with his family in 1992, as a refugee. He lived for the next 18 years in Pathri Refugee Camp located in the eastern Nepal. He married Purna Sarki, at the young age of 21. He had two daughters, Durga and Dilisha, before he moved to Salt Lake City as a part of a third party resettlement program run by the UNHCR in 2010. Since then he has worked hard in different places to provide for his family. At the beginning of this year, he received a plaque celebrating his fifth anniversary at Merit Medical. He was proud of his achievement when he received recognition for his hard work. His latest position there was an Inventory Clerk. His friends and family remember him always smiling and being helpful, he will be missed. Besides spending time with his family, he enjoyed cooking, singing, playing musical instruments, especially Madal, a Nepali drum. While he was helpful and obedient to his friends and family, he never hesitated to tell them what he thought. His family and friends will miss his frankness and his smile. He is survived by his wife Purna, his three daughters, Durga, Dilisha and Daisy, his newborn son David,his parents Garja Man and Dhan Maya, his brother and sister in law Ghanashyam and Radhika, his sisters and brother in laws Yogi and Indra, Goma and Tek, Hema and Philip, Roma and Biran, and his sister Ambika and 5 nephews and 6 nieces. A memorial service will be held Monday, September 28th at the Church of Jesus Christ of Latter Day Saints chapel located at 2700 south 300 east, Salt Lake City at 11:00 am, viewing will begin at 10:00 am. The interment services will be held at Elysian Burial Gardens, 1075 east 4580 south, Salt Lake City at 12:30.

Lohan B. Sarki, 43 years, died on September 24th 2020 with his family by his side at the University of Utah Hospital. He was born on January 26, 1977 to Garja Man and Dhan Maya Balkuti in Chirang, Bhutan. He later moved to Nepal with his family... View Obituary & Service Information

The family of Lohan B Sarki created this Life Tributes page to make it easy to share your memories.

Send flowers to the Sarki family.