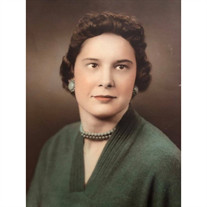 Our beloved mother, grandmother, and great-grandmother, DeVota June Bartlett Hale, age 83, passed away at the home of her son Calvin in Herriman, Utah, on June 12, 2020. June was born to Archibald Bartlett and Devota Dalton in the little farming community of Springville, Utah, on October 1, 1936. June attended Mapleton Grade School and later graduated from Springville High and seminary. She helped on the small family farm and worked at Eddington Cannery until she moved to Salt Lake City for better work opportunities. There she met her eternal sweetheart, Dee A. Hale. They were sealed for time and eternity on June 26, 1959, in the Salt Lake LDS Temple. Dee and June eventually settled and raised their five children in Murray, Utah, where she lived in the same house for over 50 years. June had learned the value of hard work early, and she passed this on to her children. June was an avid gardener and a talented quilter. Later in life, with the encouragement of a good friend, she took up oil painting and shared some of her art with family and friends. According to June, the credit of her success went both to the Savior and her very talented teacher, Judy Anderson, who had never-ending patience with her. The gospel, service, and her family were June's life. June was a devout member of The Church of Jesus Christ of Latter-day Saints. She held numerous callings and positions, including Gospel Doctrine teacher and stake Primary president. June was a dedicated worker at the Jordan River Temple, first with her husband until his death in 2000 and then for another 15 years, stopping only when the temple closed for renovation. June's spunky sense of humor, quickness to laugh, kindness, generosity, and grit will be deeply missed by all who know her. June is preceded in death by her husband; daughter, Karrie Linn Hale; daughter-in-law Martha (Brad) Hale; her parents; oldest sister, Beverly, who was born and died on July 7, 1933; brother Roy, and little sister Leah. June is survived by her sons Brad Dee Hale, Calvin D. Hale (Pennie), Bryan D. Hale (Michelle), Rex B. Hale (Elizabeth), 10 grandchildren, and 7 great-grandchildren. In June's words: "May we all meet at the feet of the Savior someday." In light of the current pandemic and abiding by June's wishes, no public service will be held. We would like to extend our deepest thanks to everyone who visited, called, or otherwise expressed love to June during her final months. Thanks also to the dedicated and caring staff at Canyon Home Care & Hospice. Condolences may be expressed at saltlakevalleyfuneral.com. Interment at Murray City Cemetery.

Our beloved mother, grandmother, and great-grandmother, DeVota June Bartlett Hale, age 83, passed away at the home of her son Calvin in Herriman, Utah, on June 12, 2020. June was born to Archibald Bartlett and Devota Dalton in the little... View Obituary & Service Information

The family of June Hale created this Life Tributes page to make it easy to share your memories.

Send flowers to the Hale family.