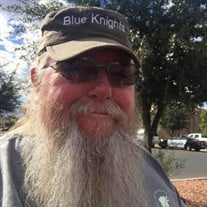 John Russell Merrick, Big John as he was known by many, passed away the morning of July 7, 2021, due to complications from cancer. John was born in Salt Lake City, Utah to William F. and Lucille Merrick and was the oldest of five children. He married Debra Ogden on October 28, 1976. John was a proud graduate of West High School and lifelong resident of Rose Park. He enlisted in the U.S. Navy in July 1970 and served until January 1974. He worked for the Salt Lake County Sheriff's office from September 1974 until he retired as a Lieutenant in April 2000. John was a member of the Blue Knights Law Enforcement Motorcycle Club for over 25 years and riding motorcycles was his passion. This is where he got the nickname Large. After retiring, he spent his time either at home or traveling on his motorcycle across Europe, spanning over one hundred thousand miles, from Ireland to Russia. This was in addition to the half million miles around the United States and Canada. His advice was, “Travel kills prejudice. Get out of your safe harbor and travel if you’re able. There’s a great big, beautiful world out there.” John is survived by his wife, Debra, their two children Tiffany McBaine,(Preston), David (Kisha), six grandchildren, Brittany, Nikolie, Skyler, Dagen, Oakley, December, his parents Bill and Lucille, and his siblings Leslie Clarke (Stephen deceased), Stevane Godina (Fernando), and Robert (Laurie). He is proceeded in death by his grandparents, his sister Anne Merrick, and many aunts, and uncles. We have been touched by the outpouring of love and kind messages from his many friends, or in his words “more friends than I can shake a stick at”. A Memorial Service will be held Saturday, July 17, 2021, from 1:00 p.m. - 4:00 p.m. at Salt Lake Valley Mortuary, 459 W Universal Circle (9160 S) Sandy, Utah 84070. There will also be a Celebration of Life gathering for family and friends the following day, Sunday, July 18, 2021, from 3:00 p.m. - 7:00 p.m. at the Riverside Lion's West Pavilion, 800 North Cornell Street, Salt Lake City, Utah 84116. We will leave you with two thoughts from John, “You’re never too old to have a happy childhood. Riding a Motorcycle is the most fun you can have with your clothes on.”

John Russell Merrick, Big John as he was known by many, passed away the morning of July 7, 2021, due to complications from cancer. John was born in Salt Lake City, Utah to William F. and Lucille Merrick and was the oldest of five children. He... View Obituary & Service Information

The family of John Russell Merrick created this Life Tributes page to make it easy to share your memories.

John Russell Merrick, Big John as he was known by many, passed...

Send flowers to the Merrick family.