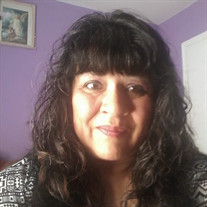 Jenette Gonzalez joined her parents Agnes and Dionicio Gonzalez, beloved son Felipe Hueramo, and many other family members on Tuesday, April 13, 2021 at her home in Ogden, Utah. Jenette Marie Gonzalez was born on April 10, 1964 in Bakersfield, California the fifth of six children from Agnes and Dionicio Gonzalez. Shortly after her birth the family would move to Salt Lake City, Utah where she would spend most of her life. She graduated from Salt Lake Community High School Vocational training OIC and as a dedicated public servant working for the State of Utah ORS, she would resign after 25 years of service. She found the most happiness doing tranquil activities such as fishing, spending a lot of her time with her grandchildren whom she loved very much. She enjoyed family gatherings around the holidays and when occasions brought the family together. She often would take people under her wing; people who would need a friend or even another motherly figure in their lives and she did it with joy and without hesitation. She is survived by her domestic partner, Miguel Palmas; her sister, Diane Chacon; brothers, Mario Nevarez, Demetrio Gonzalez and Joseph Gonzalez, as well as her daughter, Emilia Herrera-Gonzalez and son, Jose Napoleon Gonzalez, as well as twelve grandchildren and one great grandchild. She will be greatly missed; her deep love for her family, her laughter, her electricity, her faith in God, and her encouragement to others no matter how dark things seemed. Prayer services will held on Thursday, April 29th, at 10:30 am, at St. Patrick’s Roman Catholic Church located at 1058 West 400 South, Salt Lake City, Utah, followed by a Mass. Burial service will at Mount Calvary Catholic Cemetery located at 275 U Street, Salt Lake City, Utah shortly after the Mass. After the burial, there will be refreshments served at The Church of Jesus Christ of Latter-day Saints located at 630 East 100 South, Salt Lake City, Utah at 2:00 pm. We would like to thank everyone who helped donate their time, money, and efforts towards laying our sister to rest.

Jenette Gonzalez joined her parents Agnes and Dionicio Gonzalez, beloved son Felipe Hueramo, and many other family members on Tuesday, April 13, 2021 at her home in Ogden, Utah. Jenette Marie Gonzalez was born on April 10, 1964 in Bakersfield,... View Obituary & Service Information

The family of Jenette Marie Gonzalez created this Life Tributes page to make it easy to share your memories.

Send flowers to the Gonzalez family.