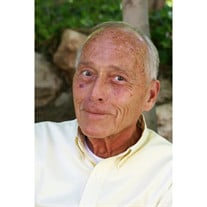 Jay Orin Whitehead, age 78, peacefully returned to his Heavenly Father in the early hours of Aug. 26, 2020, surrounded by his loving family in his home in Cottonwood Heights, Utah. Jay was born Mar. 12, 1942, in Salt Lake City, Utah, to Orin Kent Whitehead and Emma Grace Bailey. The second son of three children, Jay grew up in Salt Lake City, graduated from South High and Weltech College, and attended the University of Utah and began a career in finance. Jay served in the Utah Army National Guard 144th Medical Evacuation Unit. During his six years of service, he was active duty at Fort Leonard Wood in Missouri for nearly a year. Jay was working for Honeywell in Boston, Massachusetts, when he followed a prompting to move back home to Salt Lake City. Shortly after his move, he was set up on a blind date and met the love of his life, Trudy Murdock. They were sealed for time and all eternity in the Salt Lake Temple on Sept. 29, 1966. Together they enjoyed a life raising seven children, "all boys but six". Life was never dull in the Whitehead home. Jay taught his kids the value of hard work, sacrifice, service, and that there was always room for laughter and fun. Some of his most valuable lessons that he made sure to teach each of his children include: "Stand up for what is right"; "Pull up your bootstraps and get to work"; "Follow the promptings of the Holy Ghost"; "Never sit idle while someone else in the room is working"; and "Never ever let your vehicle's engine run out of oil". Jay was an active member of The Church of Jesus Christ of Latter-day Saints. He held many leadership positions in the Church, including Ward Mission Leader, High Councilor, Young Men's President, and serving in several bishoprics. Although he dedicated himself to each of those callings, he never lost sight of his most important calling - that of a father - and he made sure his family knew it. He was always available to lend a listening ear and give advice on any topic (whether desired or not), help with homework, fix your vehicle, and discourage boys from dating his daughters during their teenage years. He was a self-taught woodworker, and many of his wooden gifts were often found wrapped under the tree on Christmas morning. Jay was always looking for the one who needed a friend or was down on their luck. He extended his hand in service as a way to show his love for his family, friends, neighbors, and even people he hardly knew. All who knew Jay felt they had a friend in him. Those who knew him well grew to understand his humor and knew that his bark was bigger than his bite. It was evident that Jay had a heart of gold. He even knew the names of all the dogs that would walk past his house in the neighborhood. Jay taught more with his Christlike service than anyone could ever teach from a pulpit. He occasionally ran late for a meeting because he had stopped along the way to help someone. People were a priority to Jay. He made friends wherever he went, and it seemed like everyone knew him by name. Because of his loyal nature, he was quick to come to their aid and defend them at a moment's notice. Jay will be dearly missed by his family and friends. He is survived by his wife of 54 years, Trudy Whitehead of Cottonwood Heights, UT; his son Aaron (Juli) Whitehead of Holladay, UT; six daughters: Jill Cook of Draper, UT; Tracie (Edward) Goettig of Lehi, UT; Tanya (Nick) Woolstenhulme of Draper, UT; Annie (Howard) Mendes of Holladay, UT; Ashlee (Mark) Jensen of Peoria, AZ; Mandy (Dan) Moore of Sandy, UT; 22 grandchildren; and sister Sue Ann (Murry) Robertson of Highland, UT. Jay was preceded in death by his only brother, Jerry Whitehead, who passed just four months prior, and his parents. A viewing will be held Monday, Aug. 31, from 6-8 pm, and Tuesday, Sept. 1, from 9-10:30 am at the Salt Lake Butler Stake Center, 7035 S. Nutree Dr., Cottonwood Heights, UT. Masks are required. Funeral services will be held by invitation only at 11 am Tuesday. Interment in the Heber City Cemetery

Jay Orin Whitehead, age 78, peacefully returned to his Heavenly Father in the early hours of Aug. 26, 2020, surrounded by his loving family in his home in Cottonwood Heights, Utah. Jay was born Mar. 12, 1942, in Salt Lake City, Utah, to Orin... View Obituary & Service Information

The family of Jay Orin Whitehead created this Life Tributes page to make it easy to share your memories.

Send flowers to the Whitehead family.