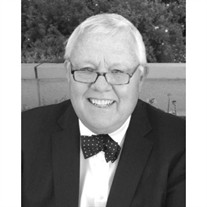 The word Aloha rings in minds and hearts as we say goodbye, for now, to George "Judd" William Brooks, 76, beloved husband, father, grandfather, uncle, and friend. Judd passed away peacefully at home surrounded by his family on August 19, 2020. He was born on September 16, 1943 in Glendale, California to Harry V. Brooks and Louise Fagergren Brooks. Judd was a man who was aloha; always an example of love, peace, and compassion. He held a deep love for Hawaii, where he moved with his family when he was a teen. He graduated from Roosevelt High School. He served in the Hawaii Air National Guard. Judd was called to serve an LDS mission in Manchester, England. Upon returning from his mission he attended The Church College of Hawaii and graduated with a degree in Business in 1969. Judd married Jeneanne Romney on July 8, 1968 in the Honolulu, Hawaii Temple. They were blessed with 5 children, 13 grandchildren and 2 great-grandchildren. While he enjoyed his career in mortgage and commercial lending, it was abundantly clear that the job of husband and father were far more important to him. Judd's most precious name was 'Dad' and 'Papa'. What are the odds of a surfer boy from Hawaii marrying a ranch girl from Mexico? We are eternally grateful that they did meet and were married. While he loved Hawaii with all his heart, that love was easily eclipsed by his love for his wife. Every day of their 52 year marriage has been full of love. His children watched two people exemplify love, and learned from their examples. In recent years, Judd delt with dementia. Jen lovingly helped him day in and day out. Everything she did for him was always followed with a humble "thank you." He was an active member of The Church of Jesus Christ of Latter Day Saints. He loved serving the Lord in many capacities. Judd loved reading. He was an avid golfer and enjoyed spending time on the course with his dad, children and many friends. He will be remembered for his big heart, humor, love of the beach, and above all his devotion to his wife and children whom he loved dearly. Even with dementia, Judd could recall and "talk story" about his beloved island home and surfing the North Shore. We are joyful to know that because Judd has passed, his strength has returned to him. Now the word aloha means more to us today than yesterday. Until we meet again. Aloha. He is survived by his wife, Jeneanne; children, Tate (Marisa) Brooks; Matt (Chantelle) Brooks; Tyson (Aly) Brooks; Candace (Russ) Call; Chase (Jessica) Brooks; 13 grandchildren and two great-grandchildren; sister and brothers, Linda Frank, Kent and Paul Brooks. Judd is preceded in death by his parents and his brother Vern Brooks. A viewing will be held on Monday, August 24, 2020 at the LDS chapel on 12352 S Big Bend Creek Drive in Herriman, Utah from 10:00-11:00 a.m. Face masks required. A family graveside will be held to celebrate the life of Judd directly after the viewing at Herriman City Cemetery.

The word Aloha rings in minds and hearts as we say goodbye, for now, to George "Judd" William Brooks, 76, beloved husband, father, grandfather, uncle, and friend. Judd passed away peacefully at home surrounded by his family on August 19, 2020.... View Obituary & Service Information

The family of George William Brooks created this Life Tributes page to make it easy to share your memories.

The word Aloha rings in minds and hearts as we say goodbye, for...

Send flowers to the Brooks family.