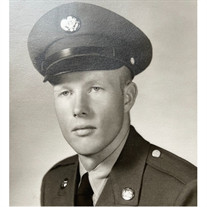 Gayle Sharp was born on January 16, 1961 to Earl and Edith Sharp of Rexburg, Idaho (the farming town), shuffled off this mortal coil at the age of 88, from natural causes. He was a member of The Church of Jesus Christ of Latter-Day Saints and married Sally Shaw in January 1961. They just celebrated their 60th wedding anniversary. Gayle accomplished many things during his lifetime. He was a member of the United States Army, where he served in Germany during the great tensions of the Cold War. Utilizing the skill-set taught to him, he served as an accountant for the State of Utah, spending over 20 years in that role. His frequent, quiet demeanor would sometimes be mistaken for being introverted or antisocial however, his intelligence, coupled with his quick wit and sense of dry humor would demonstrate a calculating observational awareness, rendering the assumption quite inaccurate. Gayle was quick to show his extroversion by engaging in one of his favorite activities, using those powers of data, gathering against many unsuspecting family members. Whether it was "dad jokes", Jeopardy trivia, sports statistics, books, politics, current events, or the alleged proving of how BYU was indeed a better college than the U of U, Gayle never missed a chance to debate (or deconstruct) any topics brought up. Gayle loved being a grandfather. He had a special place in his heart for every single grandkid, each of them having their own unique relationship with him. Having predominately grandsons, he had a special affinity for his granddaughters. Regardless of boy or girl, there was one thing you could absolutely count on-grandpa was always ready to do battle with those kids. Armed with new, crisp twenty dollar bills, the hoard of kids didn't stand a chance. You wouldn't believe he spent most of his life crunching numbers and arguing about financial conservatism from how fast he could produce a twenty dollar bill. Help mow the lawn? $20. Cut his hair? $20. Drive him to the store to get a part for something he was fixing for you? $20. It didn't matter the chore or the amount of effort (or lack of effort) the grandkids put in, he always had a crisp $20 bill to show how appreciative and how much he loved them all. The world is far better because of his existence yet, feels much more empty from his departure. Gayle is survived by his loving partner and spouse, Sally; daughters, Debra, Tara, Karen, Lisa, and Marilyn; grandchildren: LaTisha (Jeff), Marissa (Angel), Daniel (Kristy), Samuel, Kathleen, Malachi, and Aubrianna; great- grandchildren; and great-great-grandchildren.

Gayle Sharp was born on January 16, 1961 to Earl and Edith Sharp of Rexburg, Idaho (the farming town), shuffled off this mortal coil at the age of 88, from natural causes. He was a member of The Church of Jesus Christ of Latter-Day Saints and... View Obituary & Service Information

The family of Gayle Lamont Sharp created this Life Tributes page to make it easy to share your memories.

Send flowers to the Sharp family.