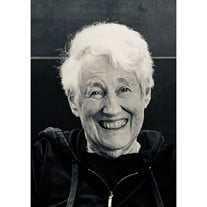 After 87 years Doris passed away peacefully surrounded by her family on January 25, 2020 having been overwhelmed by dementia which took her mind and then her body. Born June 14, 1932 in Hollywood, California during the city's golden years. She loved riding her bike to her beloved Santa Monica beach and sunbathing and swimming in the Pacific Ocean. She had the rare pleasure of attending CokeSess dances presented by Nat King Cole. She met her husband Bill Volker who was working for Howard Hughes in Los Angeles after the war. Bill and Doris made quite the couple driving around in their convertible. Reluctantly, Doris moved with Bill to Salt Lake City in 1960 to start a business and raise their family of three children. She learned to tolerate and drive in the snow, but always missed her California beach. She returned to her teaching career and for the next 30 years educated and nurtured students at Irving Jr High, Southeast Jr High and retired from East High School of the Salt Lake City school district. We're so proud of her continued passion for education and while on sabbatical in her 50's, she studied biology full-time at the University of Utah. She faced many hardships in life supporting and eventually losing her husband to complications from Multiple Sclerosis. During the same period, she cared for her daughter who fortunately survived Hodgkin's Lymphoma cancer. Harder yet may have been her two sons that escaped from their tumultuous life to ski, run rivers and enjoy the outdoors. This was all while she was a full-time teacher. It's a blessing she survived her sons, being a care giver and found ways to find the beauty and joy in life. Travel became a way to see the world that had passed by during those years. She was devoted to her religion and did not demand the same of her family allowing each of us follow our own path. She enjoyed the last few years at The Ridge Senior Living on Foothill Blvd near her home in Salt Lake City. She liked to say it was a "five-star hotel" and enjoyed indulging visitors to dine with her. After living on her own for nearly 40 years she felt safe and well taken care of. We thank all the caregivers over the years who have attended to Doris enjoying her sunny disposition. The many kindnesses and love shown to her were greatly appreciated by Doris and her family. Doris was a kind friend to all she met and would light-up whenever she was surrounded by her family. She loved speaking Spanish with anyone willing to converse with her. Sofi became an instant favorite to showcase what she retained Survived by her brother Chad (Nancy) Stanford, children Robert (Maura), Eric, Carol (Laird) Hamblin, grandchildren Cortney, Ashley, Lucia, Zoe, Ruby, Adam, and great granddaughter Nicole Abiding with Doris' wishes there will not be a public service. In lieu of flowers please make contributions to the M.S. Society -https://www.nationalmssociety.org/

After 87 years Doris passed away peacefully surrounded by her family on January 25, 2020 having been overwhelmed by dementia which took her mind and then her body. Born June 14, 1932 in Hollywood, California during the city's golden years.... View Obituary & Service Information

The family of Doris S. Volker created this Life Tributes page to make it easy to share your memories.

After 87 years Doris passed away peacefully surrounded by her...

Send flowers to the Volker family.