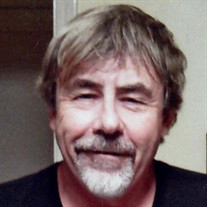 Don Jay Wilson, our brother, father, grandfather, partner, and friend, passed away on June 2, 2021, at Timpanogos Regional Hospital, Orem, Utah, due to heart complications. He was born June 28, 1957, and spent his life in Payson and Salem, Utah. He had a great smile, and when he did laugh you laughed with him! He enjoyed the outdoors, camping, fishing, and hiking. Some of his favorite places were Scofield Reservoir, Otter Creek, Piute Reservoir, and Dripping Rock. He was known as a kind, caring, and generous man. Don Jay had his only child with his first wife Teri Brook. He loved his daughter Kristina, and she loved that he was always there for her. He enjoyed spending time with his grandchildren, who brought a “Grandpa” smile to his face. Don Jay and Connie—the love of his life—loved to spend time with each other, and frequently talked about their trip to Hawaii. He was her rock. He had many animals, some with crazy names: “PC the Frog,” “Bluebird,” and “Yellow Bird” (all were cats); the duck he carried around when he was a child; his owl he cared for as a teen; and most recently, his dog Maxie who was beside him wherever he went. He was a long-time faithful employee of North American Arms in Provo for 30 years and enjoyed his career there. Don Jay had recently retired a few weeks prior to his death, ready to start a new chapter in his life. He was going to pursue his dreams of inventing things like his father and writing a sci-fi novel. Don Jay is survived by his daughter Kristina Cecala; grandchildren Shelby, Amari, and Hagen; his fiancé Connie Argyle; his siblings Duane Bahr (Linda), Bonnie Jean Davis (Neil), Carol Wood Degraw (Bill, Terry) Carl Bahr (Rita, Mary), Janet Johnson (Arlen), and Ranee Peterson (Lane); and last but not least, his lifelong friends. He was preceded in death by his parents Don and Mae Wilson; wife Joanne Clayton; brothers-in-law Neil, Bill, Terry, Arlen; and sister-in-law Rita. A Viewing will be held Tuesday, June 8th, from 10:30 to 11:30 am, at The Church of Jesus Christ of Latter-day Saints, Salem 9th Ward, 60 South Main Street, Salem, Utah. Graveside Services will follow at 12:00 pm at the Salem City Cemetery, 965 South 140 East, Salem, Utah. Funeral Directors: Salt Lake Valley Mortuary

Don Jay Wilson, our brother, father, grandfather, partner, and friend, passed away on June 2, 2021, at Timpanogos Regional Hospital, Orem, Utah, due to heart complications. He was born June 28, 1957, and spent his life in Payson and Salem, Utah.... View Obituary & Service Information

The family of Don Jay Wilson created this Life Tributes page to make it easy to share your memories.

Send flowers to the Wilson family.