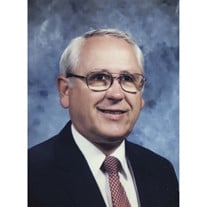 Daniel Willard Anderson died peacefully December 05, 2019, at the William E. Christofferson Veterans Home, Salt Lake City, UT. of frontotemporal degeneration and alzheimers. He was born Sept 17, 1934 in Ephraim, UT to Lars Cannon and Hazel Anderson. He was the youngest of four children and raised in his father's drug store as the soda jerk. Dan graduated from Snow College, and while there ran the radio station KEPH-FM and named himself Rusty Dan the Dusty Record Man. He served in the Army during the Korean War, 1954-55 mostly in Texas. He said that was the only foreign country he went to. He moved to Salt Lake and met and married Audrey Nieser in 1957, later solemnized in the Salt Lake LDS Temple. He graduated from BYU with his bachelor's degree in education. He taught at Mt. Jordan Jr. High and Eastmont Middle School. He then became Vice Principle of Bingham Middle School. While at Bingham he attended the University of Utah and received his Masters Degree and his Professional Certificate. He then became principal at Butler Elementary and then Heartland Elementary. He loved the elementary children and felt this is where he belonged. He also taught at the Utah State Prison for 5 Years. Dan and Audrey got their amateur radio license and built all their radios together. Dan's call was K7SAA and Audrey's was K7OLR. They talked to people around the world by Morse Code and was very active in the ARC until Dan went back to school and had to sell the radios for tuition. Dan was a proud member of The Church of Jesus Christ of Latter-day Saints and held many callings. He and his wife served a three year CES mission in Sandy, Ut. He loved people and was a good friend to all. He loved sitting on the porch watching the children play and liked it when people would come sit with him and visit. Dan was a very proud American, a true Patriot, and on the 4th of July would put a speaker in the window and play taps and have out children participate in a flag ceremony. When our grandchildren were old enough he had them help. He loved camping and fishing with his family and reading. The first month he retired he read 20 books. He loved Louis L' Amour books and when his memory started to go he said the only thing that was nice about the disease was he could read these books over and over every time and it was like a new book to him. Dan is survived by his wife Audrey, daughter Collette Chavez, Sons, Daniel W. Jr. (Tamera) and Lars (Laurie). He had eleven grandchildren and three great grandchildren. He is proceeded in death by parents, two brothers, a sister, grandson and son-in-law. Funeral services will be held on Saturday, Dec. 14th at 1:00 pm at The Church of Jesus Christ of Latter-day Saints Chapel, 1050 Galena Drive, Sandy, Utah, where Viewings will be held on Friday, Dec. 13th from 6:00 to 8:00 pm and prior to the service on Saturday from 12:00 to 12:45 pm. Interment will be in the Larkin Sunset Gardens Cemetery. Funeral Directors: Salt Lake Valley Mortuary.

The family of Daniel Willard Anderson created this Life Tributes page to make it easy to share your memories.

Send flowers to the Anderson family.