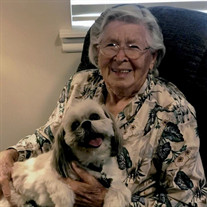 Betty Jean Fletcher was born in Preston, Idaho on Friday August 13, 1926 to Marian Ellis and Samuel Henry Fletcher. She has never considered Friday the 13th as unlucky. Our dear loving mother, grandmother, great-grandmother left us June 29, 2021, peacefully in her sleep and has gone to join the rest of her family. When she was 16, she left Preston to work in a munition’s factory in Ogden, UT. Betty later attended nursing school at Utah State University in Logan, Utah. She did her internship at St Mark's Hospital in Salt Lake City where she met her future husband, Hans Leland Christensen. He later followed her to San Francisco, CA. They married on November 8, 1949, in Reno Nevada. Betty returned to work at St Mark’s Hospital, and later, the Fort Douglas Dispensary. When the dispensary was closed in 1967, she was transferred to Travis Air Force hospital near Fairfield, CA and worked there for 6 years before returning to SLC. Betty continued to work in nursing at the Veteran’s hospital and later with the American Red Cross on their blood mobile. Betty was loved for her kind, accepting heart. If there was someone who needed help, Betty was there. Whether it was adopting pets or people, Betty had a place in her heart for them and that love was returned tenfold by those who knew her. She showed us by her example that where there’s a will there’s a way like roofing her own home with her daughters and friends both in Fairfield and her small home in Salt Lake. Mom helped open the world to us. She was interested in and introduced us to everything, new foods, new hobbies, new places. She had an insatiable appetite for learning. From learning leatherwork to carpentry and getting her contractor’s degree in her 50’s and learning Spanish in her 80’s, she showed us there is never a time to stop learning. She loved to travel and visited much of the Western United States, Canada, Europe and Mexico with family members. Betty is survived by her five daughters: Julia (Joe) Pavilga, Claire (Reed) Gee, Jane (Larry) Roberts, Mary (Don) Beyer and Beth (Brad) Hutchings. She was also blessed with 15 grandchildren, 18 great-grandchildren and 3 great-great-grandchildren. She was preceded in death by her parents, brothers (Max and Sam) and sisters (Bonnie and Preal) and grandchildren (Sarah and Levi). We wanted to express our appreciation to the staff at Legacy Village in Provo, UT, for their loving care of Mom during her time there and Salt Lake Valley Mortuary. Also, all those who have expressed their love and willingness to assist the family both before and at her passing. In lieu of flowers please consider donating to a humanitarian cause. Funeral services for immediate family will be held on Saturday, July 10, 2021 at 11:00 am at the West Jordan River 2nd Ward located at 1380 W. 6785 S., West Jordan, Utah. A viewing will be held prior to the service from 10:00 to 10:45 am at the same location. Interment will take place in the Wasatch Lawn Memorial Park Cemetery. Funeral Directors: Salt Lake Valley Mortuary.

The family of Betty Jean Christensen created this Life Tributes page to make it easy to share your memories.

Send flowers to the Christensen family.