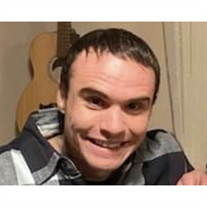 On Thursday, January 14th, 2021, Austin Daniel Parkin was found passed away at the age of 31 at his home in Salt Lake City, Utah. Austin was born in Salt Lake City, Utah on November 26th, 1989, to Gaylen Michael Parkin and Jane Mendenhall Parkin Halford. Austin's eyes would light up the instant he saw you. His heart was so full of love and kindness. He loved animals, nature, and had a passion for raising chickens for which he won 1st place in showmanship at the local and state 4-H clubs at the age of 10 years old. Austin would gladly help anyone and was incredibly generous and would not judge anyone; he would accept you for who you were and would never think the worst about you. He would always inspire you and lift you up. Austin's most prized achievement was his daughter, Purity whom he loved very much. His biggest goal was to reunite and raise his daughter Purity and to become a motivational speaker. Austin is survived by his father, Gaylen Michael West; brothers, Derek and Robert; sister, Aubry; aunt, Debby Parkin; uncle, Cory Parkin; cousins, Stephanie and Whitney; and his beloved daughter, Purity Yoesel. Austin was preceded in death by his mother, Jane Mendenhall Parkin Halford. Services for Austin will be held Saturday, February 20th at 2:00 PM at the LDS 9th Ward, 11420 South 700 West in Draper, Utah. May you now walk hand in hand with Jesus Christ, our savior and redeemer, surrounded by our Father in Heaven's angels in the kingdom of heaven for all eternity. Until we meet again, rest in peace my son. Funeral Directors: Salt Lake Valley Mortuary

The family of Austin Daniel Parkin created this Life Tributes page to make it easy to share your memories.

Send flowers to the Parkin family.