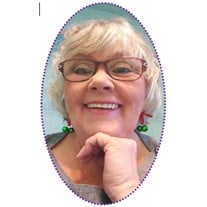 Angela F. Jackson August 10, 1962 – August 10, 2021 Angela “Angie” F. Jackson, 59, passed away Tuesday, August 10, 2021, at Lone Peak Hospital in Draper, Utah, from post-surgical complications. She was born Angela Jo Erickson in Payson, Utah, on August 10, 1962, the daughter of Robert Jerry Dudley and Julie Chlo Erickson. Angie did not know of her birth father until late in life. She lived with her mother in Spanish Fork, Utah, at the home of her grandparents, Matthew Thorgare and Mary Cilicia “Polly” Hill Erickson. She had a very special relationship with them, particularly with her grandfather, who doted on her. At the age of three, her mother married John Robert Schweiss, who then adopted Angie, giving her the last name of Schweiss. From that point forward, Angie was raised in Provo, Utah, until the age of seven. The family then moved to Salem, Utah. She lived in Salem until the age of 15, at which time, the family moved back to Provo. Angie was educated in various Utah County schools, eventually earning her GED. After completing her secondary education, Angie served for a brief time in the US Army, where she met her first husband, Brent A. Francom. Her first marriage was short-lived, ending in divorce, but from this union came Angie’s son, Joseph Allen Francom, whom she feels is one of the greatest blessings of her life. Angie married a second time to Troy Mitchell. They later divorced. Her third and final marriage was to Bill Jackson. This marriage also ended in divorce, but from it, she gained a stepdaughter, Briana Elliott, another great bright spot in her life. They shared an immediate mother-daughter bond and have remained close and supportive of one another since that time. Angie would probably be the first person to tell you that for a large part of her life, she endured personal struggles that resulted in difficult consequences, to include the loss of her freedom. It was the period of her life when the greatest mistakes were made, and the hardest lessons were learned. She endured it all, eventually conquering her problems, and fighting hard for a place back in good society. She was always frank about her past, never hiding it, and was proud of overcoming it. Angie was an active member of The Church of Jesus Christ of Latter-day Saints. Her Faith was instrumental in her recovery and rehabilitation, and she was invested in her callings. At the time of her death, she was a temple and family history consultant, a genealogical indexing worker, and a Relief Society ministering sister. She also led a group of sisters in a weekly “Come Follow Me” gospel study program. Angie enjoyed a vast array of hobbies, mostly of a restorative nature. She loved to collect antiques and historical knick-knacks so that their value was not lost. She sought out great bargains on used items to find ways to repurpose things so that they were not wasted. She was often working on home improvement projects to return things in her house to usefulness. After inheriting our mother’s sewing machine, she enjoyed the process of sewing items, rather than having to pay more to buy them. And last but not least, she loved gardening, which is basically creating something from almost nothing, rendering her self-sufficient and fed. Her hobbies and habits reflect her reverence for the rehabilitation process that meant so much to her throughout her life. Over the past two years, Angie’s health began to decline. She suffered immensely from back problems, which in turn caused other issues for her – balance problems, broken bones and torn ligaments, and mobility issues. Not being able to get around and maintain her self-sufficiency was a great trial for her. It robbed her of her passions in life, causing lots of frustration and depression. Ever the survivor, she kept plugging along, right up to the point where her body could no longer keep up with her spirit. She passed away on her 59th birthday, lasting an extra 11 hours longer than the doctors expected her to. Angie is survived by her son, Joe Francom, and stepdaughter, Bri (Cody) Elliott, as well as her honorary grandchild, Bri’s son, Adonis Elliott. Angie also leaves behind two brothers, John Correy Schweiss and Jerry (Jessley Porter) Schweiss; two sisters, Traci Brown and Michelle Sterling; and many nieces, nephews, cousins, neighbors and friends who will miss her feisty spirit! Angie was preceded in death by her birth father, Jerry Dudley, whom she never met. With the help of DNA testing, she was able to locate other members of the Dudley family and made meaningful connections with them over the last few years. The Dudley family welcomed her in with open arms and it meant a lot to her. Angie was also preceded in death by her parents, John and Julie Schweiss; her maternal grandparents, Matthew and Polly Erickson; her paternal grandparents, Joseph Paul and Naomi Schweiss, and Elsie Neeley and Joseph Stimpak; and an infant sister, Cilicia Marie Schweiss. Funeral services will be held Monday, August 16, 2021, at 11:00 a.m., at the Sandy Utah West Stake Center (Pioneer Ward) 8680 S. 220 E., Sandy, Utah. A visitation will also be held prior to the funeral services at the same location, from 10:00 to 10:45 a.m. Interment will be at the Spanish Fork City Cemetery, per Angie’s wishes to be buried near her beloved grandparents.

The family of Angela F. Jackson created this Life Tributes page to make it easy to share your memories.

Send flowers to the Jackson family.