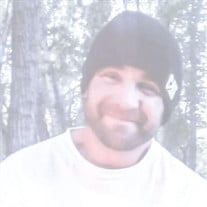 Aaron Joseph Westerman was born on January 18, 1982 to Peggy Christensen and Kenneth Westerman. He passed unexpectedly on October 20, 2021. Aaron was a fun-loving child; he loved to tease his brothers and always had a twinkle in his eyes and smile on his face. Aaron graduated from South Summit High School in 2000 where he lettered in wrestling, football, and baseball. Aaron was an avid hunter and enjoyed hunting with his son Ayden. Aaron put his heart into everything he did, he had many talents and was a jack of all trades, there wasn’t much he was not able to do or figure out an enjoyed the challenges that came his way. Aaron was proud of his children, he had a huge heart and never stopped thinking or talking about his 4 children Ayden, Eesha, Aaya and Lindy. Being a father was to Aaron his greatest accomplishment and he never stopped planning and talking about his kids. He wanted to give them the world and it made him sad he couldn’t. Aaron talked about a time that he would be able to work with his son Ayden. Aaron loved his family fiercely and would do anything for his brothers if asked and would not ask anything in return. Aaron wanted most in this world to have a loving family, he enjoyed family gatherings and the opportunity to celebrate life’s joys. For Aaron it was as simple as forgetting past wrongs and letting bygones be bygones. Being forgiving and empathetic was second nature to him, his example on how easy it is to love, laugh, forgive, and forget will be missed. To know Aaron was to laugh, his humor was contagious. He was always joking. He was always the center stage and had a magnetic personality. He laughed at himself the most and is probably laughing now about how he “messed up this time.” He would want most for us to remember him that way. Aaron is leaving behind many that loved him. His brothers Jeremy, Devin, and Tony, as well as his sister Melissa. They have lost their bro who had the biggest heart and saw the positive in them. Aaron is leaving his earthly guardian angels, his mother Peggy and Megan the mother of Ayden. Megan and his mother were his greatest champions, they always saw the best in him and suffered some painful times these last years as no one should but would do nothing different. Aaron has left behind many people that love him, his nieces, nephews, aunts, uncles, coworkers, and friends. Aaron went home too soon and is already sorely missed! Aaron would want us to celebrate the good things in our lives, forget the bad as he was working to do. Aaron would want us to eat some food, laugh, tell some funny stories, and have a good time. Services will be held Tuesday, October 26th, at 6:00 pm, at Salt Lake Valley Mortuary, 459 W Universal Circle (9160 So.), Sandy, Utah, where a Viewing will be held prior to services from 3:00 to 6:00 pm. There will be a gathering for any and everyone who wishes to eat and remember a kind and loving person. Dinner will be at his brother Tony’s house following the service. Address will be announced. Funeral Directors: Salt Lake Valley Mortuary.

Aaron Joseph Westerman was born on January 18, 1982 to Peggy Christensen and Kenneth Westerman. He passed unexpectedly on October 20, 2021. Aaron was a fun-loving child; he loved to tease his brothers and always had a twinkle in his eyes and... View Obituary & Service Information

The family of Aaron Joseph Westerman created this Life Tributes page to make it easy to share your memories.

Send flowers to the Westerman family.